Lot 234 is a colt from New Zealand Filly of the Year Fix, who was bought by Tom Magnier for $1.25 million in 2015 (c) Magic Millions
Australia

Weanling Frankel colts to be offered at Magic Millions

Frankel has made a huge impression in Australia siring 10 stakes-winners here so the two weanling colts to be offered at the Gold Coast this week by the champion son of Galileo will command massive interest.

Published 18th May 2022 on breednet.com, by Tara Madgwick

Both are consigned by Coolmore from mares that were originally bought at the Magic Millions National Broodmare Sale and then started their stud careers overseas before returning home to Australia in foal to Frankel.

Fix produced four foals by Galileo in the Northern Hemisphere and three have raced for two winners including promising 3YO filly Know Thyself, who has been twice stakes-placed this year in France at her last two starts.

The family also has another important update as exciting 2YO So You Think colt Political Debate is from a half-sister to Fix. 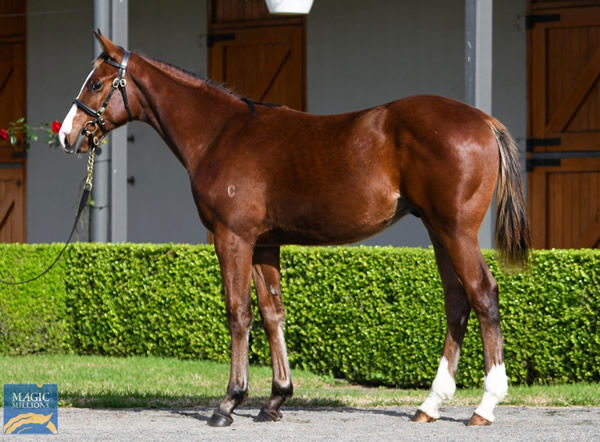 Frankel colt from Nechita, click to see his page.

Nechita had five foals by Galileo in the Northern Hemisphere and four have raced for three winners headed by Group III winners Harpo Marx (he’s in Australia racing for Bjorn Baker) and Forbearance with 3YO Awesome Wonder also now in Australia.

Entered for the Queensland Oaks, Awesome Wonder won her first start here at Wyong over 1600m last month and John O’Shea has her entered for Rosehill this Saturday over 2000m.

The non-winning Galileo daughter of Nechita called On Tiptoes (IRE) is entered for the Magic Millions National Broodmare Sale as Lot 1241 and is in foal to Camelot.

For the record Frankel has had 36 winners in Australia/ New Zealand from 60 starters, 18 have earned Black Type and 10 are stakes-winners.